Having connectivity wherever you go is important to us here at weBoost. We think having a strong network connection in the airport is especially important. Nothing feels like more of a waste of time than sitting in a terminal waiting for your flight, and not being able to respond to an email, or send your boss the latest report. When free time is so hard to come by, we think taking advantage of every minute is vital.

So, you might be interested to know that Root Metrics (via @FierceWireless) suggests that Verizon and T-Mobile will give you better performace in an airport. See the article pasted below–

If you spend a lot of time in busy U.S. airports, Verizon Wirelessand T-Mobile US  are likely going to offer you better overall performance and mobile data speeds than AT&T Mobility  and Sprint, according to the latest bi-annual report from network testing firm RootMetrics.

In its latest test of airport network performance, the firm used web and app access rates and task success rates as indicators of network reliability. Access rates showed how often the firm was able to connect to a network during web/app testing, while task success rates showed how often RootMetrics was able to complete a web/app task. The firm noted that a threshold of 97 percent success “is a high bar and reflects performance that would pose little to no noticeable disruptions to everyday activity.” RootMetrics also measured median downlink and uplink speeds of the carriers. The firm used a 20 Mbps threshold to indicate “lightning-fast download speeds” and 10 Mbps as a measure of excellence for upload speeds. 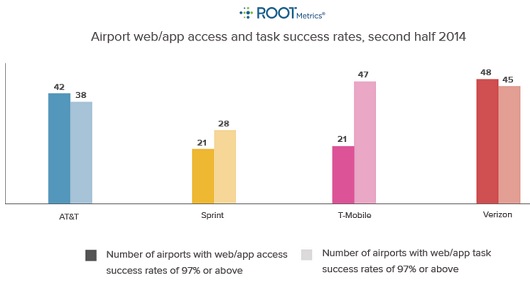 With 31 wins, Verizon won the most first-place Airport RootScore awards of any network by far in the second half of 2014. According to the report, Verizon fell below 97 percent in web/app access success at only two airports and below 97 percent in web/app task success at only five airports. It had by far the most airports with median download speeds of 20 Mbps or higher and median upload speeds of 10 Mbps.

Sprint clearly has some catching up to do in terms of its performance at airports. Although the company expanded LTE coverage to 260 million POPs by the end of 2014, it is only using 5×5 MHz spectrum blocks for its 1900 MHz LTE network, which inhibits its speeds. The company also deployed its faster 2.5 GHz TD-LTE network to more than 100 million POPs by the end of 2014. RootMetrics said Sprint had the lowest number of airports with web/app access and task success rates above 97 percent. There was only one airport where Sprint provided median download speeds above 20 Mbps or median upload speeds above 10 Mbps.